YouTube has just announced that they have one billion people visiting the website every month. This major milestone shows the potential for offering (and monetizing) live event streaming video from your venue. This post looks at just how easy and inexpensive broadcasting your event really is, no matter what type of event you may have.

One Billion People a Month

Last week, YouTube announced it now has one billion unique users every month. The tremendous milestone comes as no surprise to those who have watched the platform grow over the past eight years. Originally launched as a way for everyday people to share personal videos with their friends, YouTube is now a broadcasting powerhouse on par with the major television networks.

A more recent development is YouTube's entry into live event broadcasting, which began with live U2 concerts that were watched by ten million people worldwide. Since that first concert, the live event streaming video market has matured and costs have plummeted to almost nothing.

Previous posts have encouraged venue owners to take advantage of the near zero costs of streaming live video from the their event. Even going so far as to suggest venues monetize the video stream by making it part of the ticket purchase process.

The level of commitment you make to live stream your event is up to you. You can defer it all to a third party, start small with a Google Hangout, or something in between like studio quality audio enabled, with one or two prosumer video cameras. Regardless of your broadcast quality commitment, the all important question of monetizing the live stream of your event must be addressed posthaste.

One may mistakenly assume that only big music concerts are worth live video streaming, but that is not the case.

Easier (and cheaper) Than You Think

The pervasiveness of smartphones means there is already a built-in potential viewing audience to watch event streaming video. Both iPhones and the current generation of Android phones can easily display live streaming video. Popular apps like Ustream make it easy for you to broadcast live. Ustream even offers the monetization path of Pay-Per-View as an advanced option.

You can get a feel for what streaming your event live would be like by installing Ustream on your phone and doing short broadcasts. Impromptu live broadcast can be from any type of event, not just music concerts. And since many of the streaming tools also include easy to use social sharing, measuring the return on your effort will be immediate.

Of particular note is using live streaming video as a sales tool for recurring events. If your poetry slam is set for every night of the week, but ticket sales for a certain day are lagging, try a partial live video stream. You need not give it all away for free. Simply let you Twitter followers and Facebook fans see what the event is like via live streaming video (followed immediately with a link to buy tickets!)

The Hangout feature inside Google social network google+ connects directly with YouTube. When you start a video hangout, you have the option of letting anyone, all one billion YouTube users, watch your broadcast live. Reminder: it is free ($0.00) to use the live streaming video feature of google+ Hangouts. 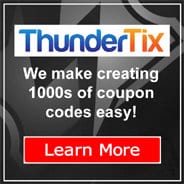 After getting your feet wet with partial broadcasts you can graduate to more formal event streaming video. Making those broadcasts for sale as a ticket is the next logical step. You can sell access to the live video stream for your weekly poetry slam only if and when a sell out has occurred. Maximum occupancy of the venue doesn't mean you have to stop making money!

ThunderTix offers the tools to create special ticket up-sells and packages for your foray into event streaming video. We also support coupons from Groupon and make importing all those unique identifier easy.