Why you should provide a live video stream of your event 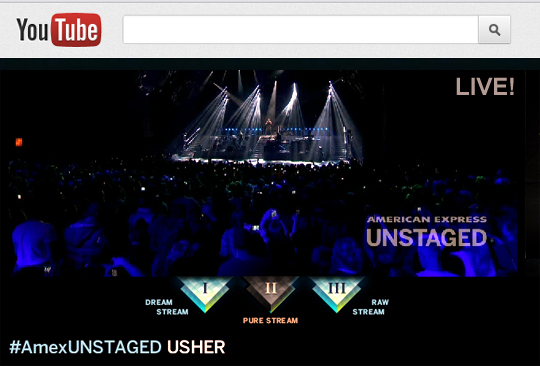 For the past several years, Internet video giant YouTube has refined its live video broadcasts from an occasional experiment viewed by a few thousand, to the current global audience of billions. YouTube's big budget live events can be scaled down for use at your venue at a minimal cost and effort.

Why do we blog this? In this post we'll show you some economical ways to broadcast your event live over the Internet, and more importantly, why doing so can increase your box office revenue.

Starting with its first live broadcast in 2008, to the U2 concert in 2009 and culminating in the 'Unstaged' performance by Usher, YouTube LIVE is now the reference standard for live streaming video of big music concerts.

The frequency in which YouTube broadcasts live events has been increasing, with a huge global viewership increasing proportionately. Thirty years ago only the big television networks had the ability to broadcast live to millions of people worldwide. Now the torch has been passed to YouTube which transmits multiple concurrent global live broadcasts far more frequently than network TV.

You do not have to be a big company with the scope and scale of Google owned YouTube to broadcast to millions of people. The cost of live video streaming has plummeted in recent years allowing for hard working venue owners and event managers(like YOU!) to be their own network TV stations.

Capitalizing on the democratization of low cost live video broadcasts is as easy as combining the high-speed internet your venue already has, any common laptop computer and a $20 USB webcam with one of the following Internet live video platforms.

How to broadcast your event live

YouTube began it's democratization of live broadcasts at the high end announcing so-called "channel partners" in 2011. Since then, Youtube has been slowly rolling access to live broadcasts to regular accounts and just last month everyone now has the means to broadcast live on Youtube via Google+ hangouts.

In adition to streaming your event live on YouTube using low cost desktop computer, you can also utilize the mobile version of hangouts on your Android phone lowering the cost to essentially zero.

JustinTV has partnered with Wirecast for professional grade live video broadcasts but still supports low cost streaming using common USB webcams and mobile phones. Unlike Google+ Hangouts, live broadcasts can be viewed by anyone on the JustinTV website, no account sign-up is required.

JustinTV’s is free to use, with no limit on the numbers of viewers that can watch your live broadcast. It is also the easiest to use, as a broadcaster and a viewer, with little more required than pushing “play”.

Offering all of the same features and functionality of YouTube and JustinTV, Ustream goes one step further by also offering Pay-Per-View (PPV) broadcasts for your event. Ustream's Pay-per-view lets you monetize the act of broadcasting your event live, adding to the revenue streams you already have in place.

A possible use case for PPV is if your event has already reached capacity and the sell out has left many without tickets. Once you have sold all the tickets, you can then announce the availability of a pay-per-view live video stream.

The result is your sellout crowd will be in attendance, having the privilege of experiencing the entertainment in person while the at-home live video viewers get to attend virtually - and both are paid attendees.

By providing a pay-per-view live video stream of your event your paid attendance can far exceed your venues physical capacity. Why limit yourself to just 500 tickets, when your event can have 500,000 in paid box office receipts? :D

As of this writing, Ustream is the only web based platform to offer the option of a Pay-Per-View broadcast of your event.

When to broadcast your event live

A critical decision is when to broadcast live. That depends on the nature of your event.

If your event is a re-occuring one like a daily guided tour, you can use your mobile phone to do quick “pop-up” live broadcasts letting scheduled and would-be attendees of later tours see what they can expect. Nearly all of the mobile live video apps offer the means for you to announce your streaming live via Twitter and Facebook.

If your event is a limited booking, like a one night only concert or play, you can segment the broadcast using the three chapters of the shared experience as a guide track.

Before your event starts, broadcasting the behind-the-scenes goings on can build anticipation as well as raise awareness of your event. Viewers may become impulsive, last minute ticket buyers after seeing that their friends are already at your event.

In addition to the potentially lucrative Pay-Per-View use case mentioned earlier, you can broadcast live during your one time event to let attendees share their exuberance. Rather than wait until later to accumulate all the different videos made by attendees, providing a live broadcast during the event gives you control over how your venue is represented.

Several of the platforms mentioned here allow you to record the broadcast simultaneously with it being streamed out in real time. The recording can be repurposed after your event is over as marketing material for future events, just like photographs. Also, it is highly likely that the recording will be watched over and over again by the people that were there, reliving the experience with nostalgia - the third and final chapter of the shared experience “story”. Ultimately the best practices for broadcasting live are tied to your business's bottom line. Your ThunderTix account has all the tools you need to manage and monitor your event’s ticket sales, thereby giving you the knowledge to know if and when to broadcast live using a streaming video platform.

Need help? We’d be glad to advise you on the best practices for live broadcasts including consultation on the equipment, software and expanding the shared experience beyond the venue’s physical capacity.