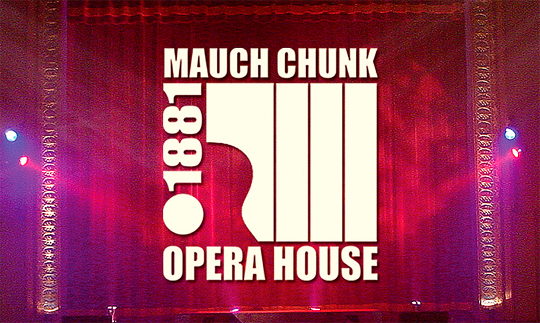 The Mauch Chunk Opera House has maintained its heritage during the 130 year journey from the 19th to the 21st century. ThunderTix is proud to be the ticketing software of choice for Mauch Chunk Opera House and we love the way such a historic venue uses ultra modern tools for event promotion, fan appreciation and cultivating the shared experience.

The mountain where bears are

Built in 1881, the opera house was a response to the community's needs to have a proper venue in which to enjoy the very latest entertainment of the time. The comedy "Edgewood Folks" was the first performance with another century of entertainment to come.

The citizens of Mauch Chunk were witness to performances by Al Jolsen, John Philip Sousa, and many of the early Vaudeville acts of the era. As the decades elapsed touring musicals, films, and live music were all showcased, each performance adding to the venue's rich history.

Of note in this modern era, the Canadian folk music group The Wailin’ Jennys recorded their 'Live At The Mauch Chunk Opera House' album in the summer of 2008. The album charted to the number five position on Billboard's Bluegrass Albums chart and won a Canadian Grammy.

In case you were wondering, "Mauch Chunk" means "The mountain where bears are" in Lenape, the language of the area's Native American people.

There may not be any bears roaming in front of the opera house but there are plenty of people lined to see their favorite artists. Big crowds and sold out performances come from event awareness, something that Mauch Chunk Opera House does very well.

A shining example of how its done 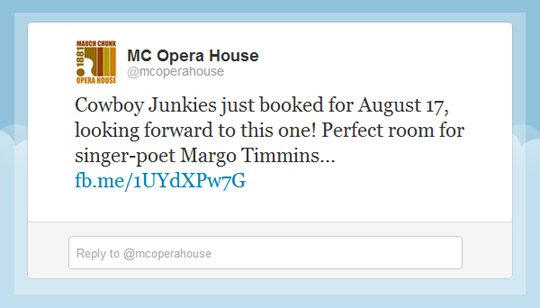 Just a few minutes spent reviewing the MCOH's Twitter, Facebook, foursquare and YouTube accounts will show just how much of a command of the medium they have. Polite and informative, each status update raises event awareness and cultivates the shared experience.

For example, recently the opera house tweeted its own anticipation for an upcoming performance by the Cowboy Junkies. Note the language and tone of the tweet, how it points to an external source that is in the context of the scheduled event, but not an outright form of self-promotion - very sophisticated!

That kind of sincerity is what would-be ticket buyers appreciate while they are in the consideration period for buying tickets. They want to know more than just raw dates and dollar amounts, they want an all inclusive perspective on the entertainment they will be experiencing.

MCOH sharing links to videos and photos of the artist scheduled to perform is one of the best ways to cultivate the shared experience for the patrons of your venue or event. In addition to sharing, the Mauch Chunk Opera House does a wonderful job of responding to questions, helping ticket buyers get the information they need about nearby dining, parking and post-event parties.

The additional ticket sales ( aka revenue ) that come from cultivating the shared experience ( a three chapter "story" of anticipation, exuberance and nostalgia ) requires that you have a command of social media on par with MCOH. Step one is acquiring all the tools. We have an on-going offer to help current ThunderTix users formulate their official hashtag and claim their venue on foursquare. It is just a small part of our commitment to improving our customer's bottom line.

We hope this spotlight on The Mauch Chunk Opera House helps you with your event awareness as a great example of the how it’s done. In the coming weeks, we’ll be posting many more “spotlights” on events, venues, our beloved ThunderTix users and some “secret” lesser known technical aspects of a successful event.