What happens to ticket collecting in the paperless “e-ticket” age? 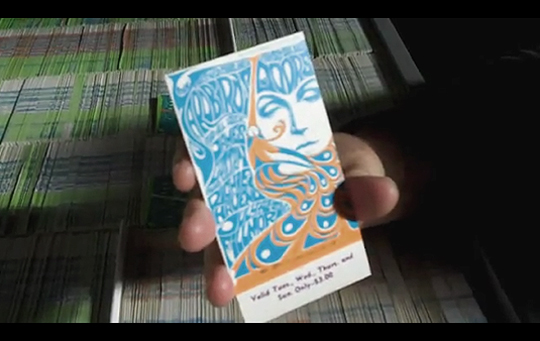 Why do we blog this? Your ThunderTix account supports the three most popular ticket printing methods and we recommend that you use the print-at-home option to lower costs - but that option may not have enough of the “souvenir” value that is so important to music fans. By knowing what makes traditional concert tickets collectible, you can create your print-at-home tickets with that same emotional value.

The Doors, Jimi Hendrix, Jefferson Airplane performed at the Fillmore Auditorium in San Francisco during the late 60s as part of legendary promoter, Bill Graham’s ‘Live at the Fillmore’ concert series. The printed tickets from those concerts are highly sought after by music fans and serious memorabilia collectors alike. Authentic vintage Fillmore concert tickets are available from the official Bill Graham Archives, also known as Wolfgang’s Vault. 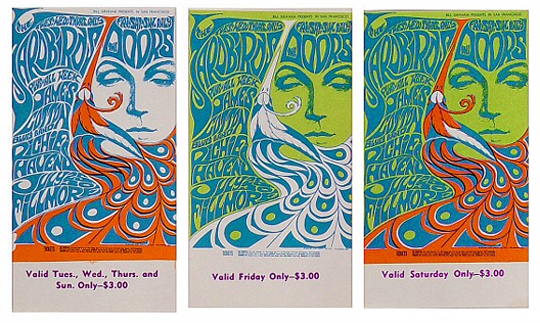 Note the face value of the ticket was three dollars - Today a set sells for $125.00.

Of course the beautiful artwork of vintage tickets contribute to their value. The artwork that appears on the Yardbirds ticket is from the concert poster designed by Bonnie MacLean. The original poster is part of the ‘The Psychedelic Experience’ exhibition currently on display at the Denver Art Museum.

The Bill Graham Archive is but one example of vintage concert ticket collecting. The official websites for The Grateful Dead and Led Zeppelin have sections for vintage ticket collectors as well

There are thousands of websites for collecting concert tickets from today’s most popular artists. Some are the labor of love by music fans often devoted to just one band, others are virtual clubhouses and serve as a place to re-live the experiences from attending a concert.

Commercial grade collectors buy and sell modern thermal paper tickets too, often at the same lofty high prices as the vintage ones since all concert tickets are of a limited supply and therefore inherently scarce.

Even the artists themselves collect concert tickets as seen in the photo below shared recently by The Henry Clay on Instagram. 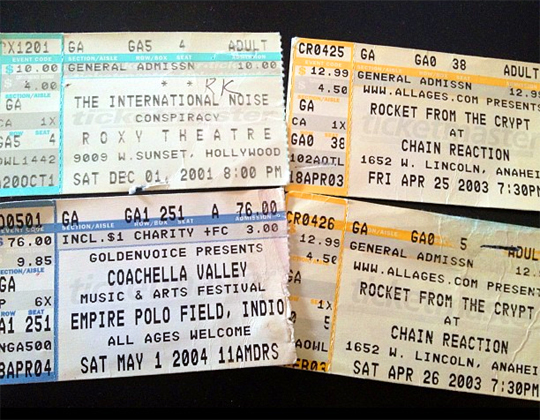 The use of Instagram by the Henry Clay People hints at what may become of concert ticket collecting as more and more events are “paperless” e-tickets. The Performing Arts And Entertainment blog describes the transition:

Websites like Flickr and Instgram are quickly becoming the most popular places to share photos of concert tickets, but there are even more specialized “ticket photo” websites like Ticket Stub Collector, which recently partnered with the venerable industry supplier the National Ticket Company. Ticket Stub Collector does not sell music concert memorabilia, nor does it solicit its users to sell their used tickets - the website exists soley to foster the shared experience. Russ Havens said of his new site:

Everyone loves memories, and stubs are basically time-stamped keepsakes that connect us with those memories. Tearing the ticket adds to the patina of it. It shows use, like a mark on a game-worn jersey.

Ultimately, the future of concert ticket collecting may be in websites like Stublisher that encourages music fans to do more than upload photos of the ticket itself, but to add photos and videos taken while at the event. With the print-at-home option of your ThunderTix account you can lower the costs of your event and still provide your customer the satisfaction of a virtual keepsake suitable for sharing on the popular sites mentioned above.

Upgrading your account to either ‘Plus’ or ‘Premium’ levels gives you the means create a custom branded print-at-home PDF so you can add a meaningful photo of the artist or a professionally designed graphic - the choice is yours.

Need help designing your print-at-home concert ticket? Contact us and let us assist you in creating a memorable experience for your event attendees or just leave a comment below!