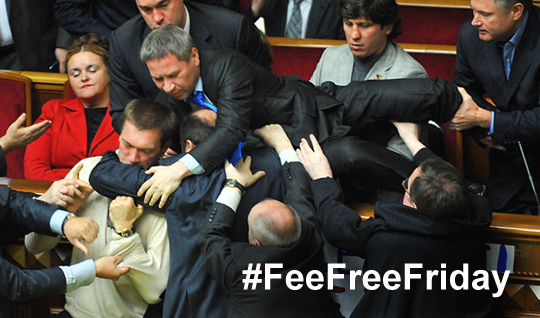 The California state senate debated if they should give up the millions of dollars worth of free tickets to professional sporting events and concerts they receive as "gifts" from lobbyists.

[ The bill ] would ban state lawmakers from accepting specific gifts that do not have a legislative purpose, including theater and concert tickets; spa treatments; golf, skiing, hunting and fishing trips; gift cards and tickets to professional sporting events. "Every time an elected official receives one of these gifts, it erodes the public trust and undermines the Legislature’s ability to lead on the big issues facing our state" Sen. Sam Blakeslee (R-San Luis Obispo) said.

Fortunately, ethics prevailed and the bill was approved 33-1 ...but wait, one vote against? Sen. Joel Anderson (D-San Diego) cast the only vote against the gift ban.

Sen. Anderson may be contacted through the California Republican Caucus website.

Being given sports and concert tickets for free is one way to avoid unreasonable high concert ticketing fees. One must ask though - How many other legislators in other states are still getting free tickets?

Fee Free Friday's kindred spirit, the Fan Freedom Project, sent a formal letter to the Tennessee Attorney General asking for an investigation into the notorious practice of automated ticket purchase programs that scalpers use. The so-called "scalper bots" snap up all of tickets available to the public in just a few seconds, forcing purchases from scalpers at outrageously high mark-ups, some exceeding 1,000%.

A Nashville TV news channel expose was cited in the Fan Freedom letter:

[Our] investigation uncovered dramatic proof that, when you go online to buy tickets, you're competing against a massive network of ticket scalpers from all across the country. News Channel 5 Investigates obtained unprecedented access to a recent concert for rising country star Eric Church, who recently completely sold out 14,000 seats at Nashville's Bridgestone Arena. As fans flocked to that sold-out show, street scalpers were out in full force, offering $32 seats at a steep markup.

Fan Freedom Project leader Jon Potter was said the letter is a call to action for the state law enforcement:

We are vehemently opposed to behavior that violates Tennessee's anti-bot laws or that otherwise strips fans of their right to a fair chance to buy the best concert seats available for face-value prices at the box office. We believe it is in the best interest of consumers, the entertainment industry and the state of Tennessee to punish those who are violating the law.

It is clear that several dozen prime seats could not have ended up in the hands of a single ticket reseller" unless they were obtained using robotic ticket-grabbing software, which is illegal in Tennessee, or through some sort of collusion.

Data provided by Ticketmaster to Church's managers indicate that the show was constantly being pinged by those illegal bots and that extra seats were gobbled up as soon as tickets were made available.

The Tennessee attorney general acknowledged that they had received the letter, but have taken no action as of this writing.

We hope this state level investigation will contribute momentum to Senator Parcell's federal legislation, known as the BOSS ACT, and bring about true reform and end the hostility towards ticket buying consumers.

Ticket distribution company Headline Tickets in Pittsburgh, PA announced this week it was eliminating hidden service fees from the purchase process on its website. Very encouraging, and we applaud the company for this effort, but buried in the press release was this shocking example of per ticket fees:

[ On a ] well known secondary ticket website, Carrie Underwood tickets for her upcoming '2012 Blown Away Tour' two tickets are listed at $291 per seat. Once at the checkout screen there is an additional service fee of $107.84 above the listed price.

A $107.84 concert ticketing fee?!?! That is a Fee Free Friday record, hopefully one that will not be broken.

This week, CHRIS BACKLEY wrote a hilariously facetious article for Thought Catalog entitled What Your Order Processing Fee Is Really Used For where he wildly speculates what TicketMaster spends the money they take from consumers via a order processing fee.

The article begins by echoing how we all feel about murky ordering processing fees:

The insane “order processing fees” that are, at times, 20-40% of the actual ticket price tacked on to our totals. If you think such a fee would be fixed and not a percentage of the actual ticket, you’d be wrong. Of course, if you opt to not have your tickets overnighted to you for $15 by a flying gold dragon, then you have a printing fee, or “convenience charge.” What’s that, you say? Ticketmaster charges you to use your own ink and own paper to print tickets.

Backley then asks rhetorically "So what does Ticketmaster do with that insane order processing fee they charge the hard-working public?" and here are some of his tongue-in-cheek answers

If you have recently paid a $19 per ticket "processing" fee you just may need a good chuckle, so you are encouraged to read the entire "list of expenditures" as comic relief.

This week's two legislative battles tally up as one win, one still in play, a pretty good week, but the war rages on.

Remember that ThunderTix allows you to sell tickets online with no fees. Fee Free Friday will be back next week after we accumulate more wins and losses from the front lines. Until then, be sure to take a look at all the features we have to offer and sign up for a free trial today!