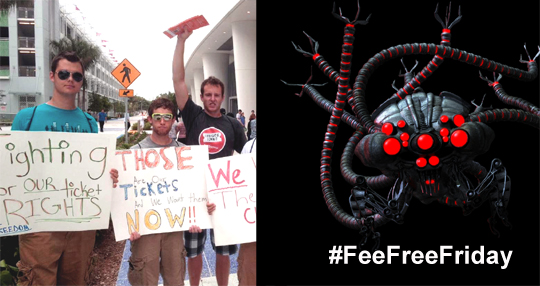 If that term is new to you, scalper bot are malicious computer programs ( aka "robots" or simply "bots" ) that scalpers use to automate the task of buying tickets online. Using hundreds of thousands of these bots simultaneously, each one capable of circumventing CAPTCHAs, scalpers acquire nearly all the available tickets for an event just minutes after the tickets go on sale. Once the scalpers are in possession of all the tickets, they can force people to buy from them - at an outrageously high mark-up over face value.

This war between humans  and robots has multiple fronts - We report on two of the bloodiest...

Our favorite knights in shining armor, The Fan Freedom Project, are again butting heads with Ticketmaster by posting a renewed call to action on their blog.

Fan Freedom's challenge has been on the table for months and what they want couldn't be any clearer - an end to scalper bots.

What is not so clear is whether or not a response has been made. This week, Ticketmaster published 'We hate bots too' on their official blog [ bold text is by Ticketmaster ].

You already know the drill: Concert tickets for a popular artist go on sale and, before you’ve had a chance to check your schedule, the event is sold out [...] scalpers use sophisticated computer programs called BOTS to snag all of the good seats as soon as the tickets hit the market. This makes it increasingly difficult for you to get the seats you want at face value.

We hate BOTS. They hammer our system and website, they substantially increase our technology costs, they anger our customers and they keep us from building a direct relationship with fans. Most importantly, the impact BOTS have on you, our fans, isn’t fair. We want them gone.

Note that in the post, there is no explicit reference to Fan Freedoms challenge, but we must admit the overall tone of the post is encouraging.

100 days ago, we joined with our partners the National Consumers League and Consumer Action to call on Ticketmaster, Paciolan and Veritix – the nation’s three leading ticketing companies – to help us fight “bots,” abusive ticketing software used by unscrupulous ticket resellers to cut the line and cheat fans.

We still haven’t received a response [to] Our letter proposed four concrete steps to stop the bots.  In response, Ticketmaster said they’re leading the fight against bots! We think actions speak louder than words. After all, fans have the right to buy tickets to the shows and games we love – without having to compete with state-of-the-art technology designed to cheat us and drive up prices.

This tip-for-tat between the Fan Freedom Project and Ticketmaster continues as of this writing and the situation is fluid, as they say. Rest assured we will keep an eye on it all and update Fee Free Fridays as events develop!

The widely reported story that malicious "scalper bots" bought up all the concert tickets for the upcoming Justin Bieber tour is now in dispute.

Billboard reported that tickets for Justin Bieber's tour of the United States and Canada sold out in an hour. Not just one venue. The whole tour. All of the tickets.

But did that really happen?

National Public Radio’s premier program 'All Things Considered' spoke with Gary Bongiovanni, the editor in chief of Pollstar, a magazine that covers the concert touring industry, to ask for his thoughts on the Beiber bots.

During the interview, NPR asked some point blank specifics on how scalper bots could have purchased all 40,000 tickets for in just minutes. Bongiovanni spoke to each of NPR's items directly, here are some highlights:

There was probably an American Express presale. Certainly the Justin Bieber fan club had a presale. And then there are a fair number of tickets that get held back for the record company, media and so on. ... It wouldn't surprise me if more than half of them were already accounted for before the public on sale.

NPR then asked: "How are these professionals able to get in line in front of everyday fans?" Bongiovanni answer:

They've got banks of computers with programs called "bots" that are set up to maneuver around the safeguard, like CAPTCHA logins, set up by ticket sellers, and they can tie up a huge portion of the available ticket stock within seconds, then cherry pick the best seats available.

The scalper bots are, ultimately, the source of the face value markup, which we feel falls into the category of "fees". Because of scalper bots, there are now thousands of Justin Bieber concert tickets for sale on the secondary market. The face value for a Justin Bieber Ticket at Madison Square Garden is $49.50...

In non-scalper bot news, but equally as horrifying, is a newly established discussion thread on a Yuku forum.

Nicknamed "Buckyville", fans of the University of Wisconsin Badger sports teams are discussing ticket prices, and fees, asking "What is the most you've spent on a music concert ticket?"

The discussion thread is brand new, so we suspect there will be more eye-openers to come.

Scalper bots, like the Sentinels in the Matrix, operate without care or concern for people.

Fee Free Friday will be back next week with all new items from the front lines of the war on unreasonable per ticket fees. Remember, always use temperance when applying per ticket fees. Your ThunderTix account gives you complete control over fees including the decision to go “fee-free”! Sign up for a free trial today!