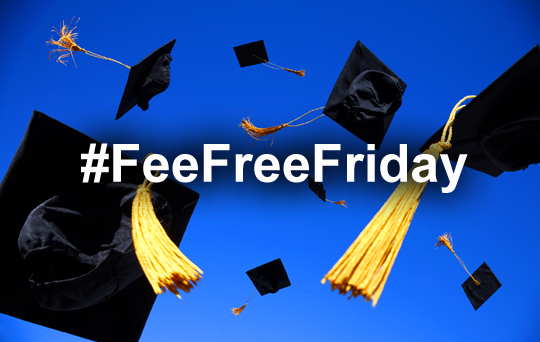 Dads and grads rejoice! This week's Fee Free Friday is a staccato of battles won, save for one especially egregious loss. So throw your tasseled mortarboard in the air as we chronicle the very latest developments in the war on unreasonable per ticket fees and outrageous face value markups!

Earlier this week, NYU economics professor Lawrence J. White penned a headline piece on the Huffington Post questioning the practice of non-transferable tickets. With the noble premise that consumers have the ultimate say in their transactions, White cited legal precedent in New York state:

The government should not be impeding technological advances in the private market, but must be vigilant when those advances are a fig leaf that is designed to mask the monopolistic effect of limiting competition in the open market...The current New York State law, which was just renewed and signed by Governor Cuomo, essentially allows venues or their ticketing agents to sell-non-transferable paperless tickets only if buyers have the option of a transferable alternative.

White goes on to acknowledge the need for technology, like paperless tickets, to safeguard against counterfeiting, but insists more can be done.

[The] alternatives include technologically inhibiting the scalpers' bots and working with enforcement authorities to track bot users, as well as limiting the numbers of tickets that any buyer or group of buyers can purchase.

New York state's Arts and Cultural Affairs Law (ACAL) isn't the only large scale legislation being implemented. Quebec Canada's "Bill 25" went live this week as well. The bill forbids ticket brokers from reselling tickets at prices above face value without first obtaining the permission of the original ticket vendor. That is a groundbreaking precedent and a huge win for ticket buyers.

More and more companies were buying large quantities of tickets without prior approval from vendors and re-selling the tickets at higher prices, often without informing consumers that it was a resale.

Enforcement of the law at the physical ticket outlets will be performed by the Canadian Consumer Protection agency. However, it is less clear how the agency plans to enforce the law across international borders where online re-sellers reside.

Penalties for breaking "Bill 25" are indeed severe - $1,000-$2,000 for a first offense and $200,000 for a repeat offense. Will this law put an end to the misery ( be they humans or bots )? Unfortunately no, since the law only applies to established businesses and not to individual persons.

These two legal enactments are excellent first steps, but given the scope and scale of the misery inflicted on ticket-buyer consumer, they are only baby steps. Sweeping federal law is still being debated by Congress.

Executives with Churchill Downs Incorporated said there is a strong possibility of eliminating the $50.00 ticket fee(!) for the 2013 Kentucky Derby. During the closed door meeting stakeholders expressed strong opinions to maintain the high fee, citing a somewhat unusual reason. The Bloodhorse explains:

He reiterated that rather than generating revenue for the track, the goal of the fee was to better track who was requesting and receiving Derby tickets and to cut down on the number being purchased by ticket brokers.

When pressed for a definitive statement on the removal of the ticket fee, Churchill Downs Inc. chairman said "I don't know. Probably yes." The fact that the fee is even being discussed in this confrontational way is reason enough for us to declare it a win.

We feel that this affiliation will greatly benefit Fairgoers as it is going to dramatically reduce the service fees for concertgoers.

The Fair says these fees are 25% less than those charged by the previous vendor and print-at-home is now available. Win!

NBA finals tickets are now without hidden fees says Greg Cullen of Preferred Seating. The highly sought after tickets have been rumored to be selling for as high as $13,000.00 each, but that is mostly on a secondary market bidding site. Preferred Seating is setting itself apart with its admirable pricing policy.

When asked about the removal of hidden fees Cullen said:

We just can’t do business that way. Customers don’t like hidden fees. And we don’t like complaints.

The gloom starts early on with a litany of offenses for performances in and around Knoxville Tennessee. The list of shows and and corresponding ticket prices include "Les Miserables" for $400.00, Shinedown for $300.00 and the Old Crow Medicine Show for $180.

Bledsoe spoke to Tim Reese and Tom Bugg to have them describe their plight as Knoxville venue owners/managers. Reese and Bugg can see the insidious practises at work first hand.

Technology has made ticket buying easier and more convenient, but it's also opened the door for secondary ticket brokers and even counterfeiters to make a killing and it's maddening for concert venues, artists, promoters and fans.

Bugg spoke at length on the subject of print-at-home tickets, echoing some of what we reported earlier from professor White. Unknowing consumers are apparently mistaking secondary market brokers websites as the legitimate venue's website, then completing a fraudulent transaction, resulting in a worthless piece of paper that will not be honored.

At the Tennessee's 2011 Alison Krauss concerts two other fans showed and their print-at-home tickets had already been scanned in, meaning someone had sold them copies of existing tickets. The same thing happened at sold-out shows by Skrillex and City and Colour. I wouldn't buy a print-at-home ticket from another source other than the venue.

The knoxnews.com article continues, at length, with Reese and Bugg sharing more horror stories of unscrupious ticket resale practices. Reading the entire post is a good reminder that the war on unreasonable ticket fees rages on...

We never apply per ticket fees to your event. We also give you full control on what, if any, fees you apply per ticket. Your business must be profitable and our technology is designed to contribute to that goal. We know there are valid costs associated with every event, but urge temperance and transparency with ticket fees. We wish the very best to all the recent graduates and want every father to have a happy Father's Day. Fee Free Friday will be back next week and until then share your high per ticket fee stories using the #FeeFreeFriday hashtag!